If you want to learn how to surf, it’s essential to know the surfing terms. The sooner you learn about surfing etiquette and the surf slang, the better. Surfing is a lifestyle, not just a sport and every sub-culture has its lingo. Surf slang is probably one of the most recognizable slangs and can be found around the world, wherever waves are close.

Most countries that have an established surf culture usually also have a few surfing terms in their own language. However, most of the commonly used surfing terms were first invented by US-American, Hawaiian, South African and Australian surfers thus, they remain untranslated and are usually used in English.

Check out our surf slang glossary to learn some common terms used by most surfers around the globe.

A wave breaking both left and right.

A trick by which you jump off the surface of the wave. 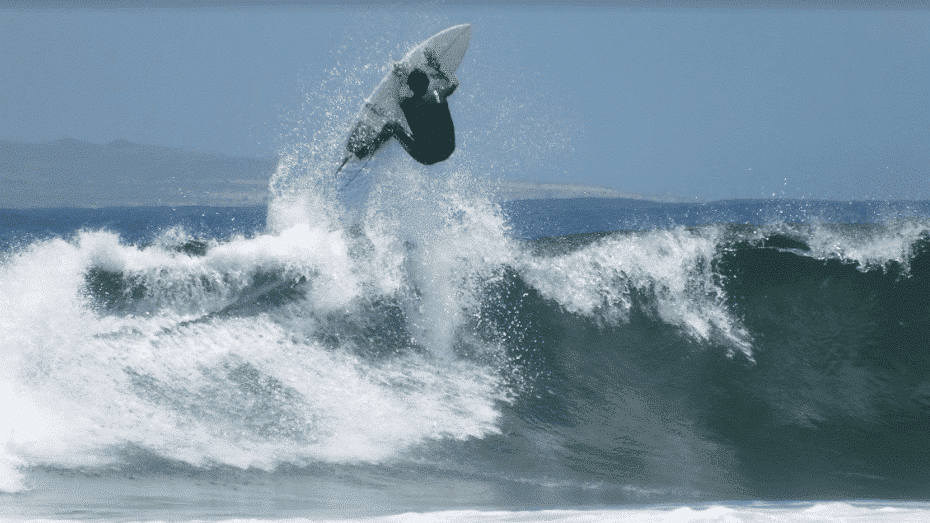 Taking a wave from behind the peak of a hollow wave and surfing through the barrel to the other side of the peak.

The position when surfing with your back facing the wave. 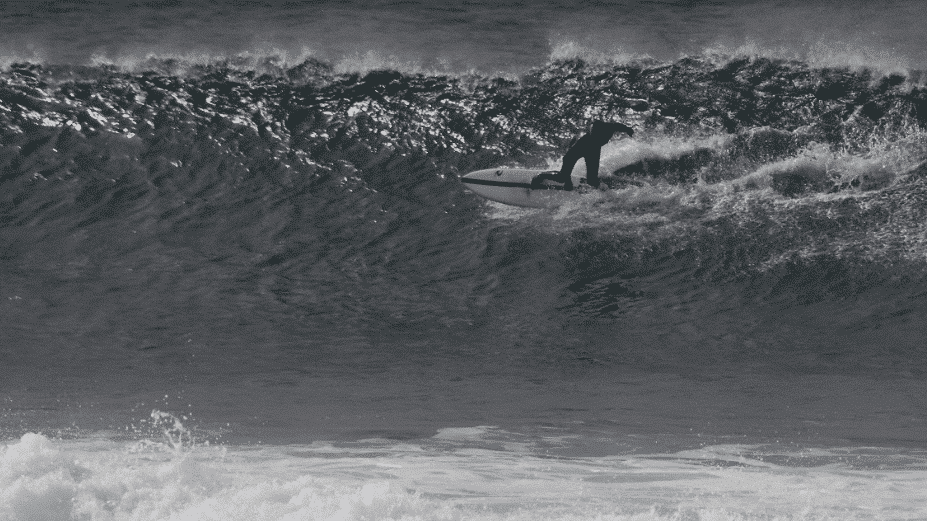 Jumping off the board to avoid a wipe-out.

The hollow curling part of the wave aka the dream of every surfer. 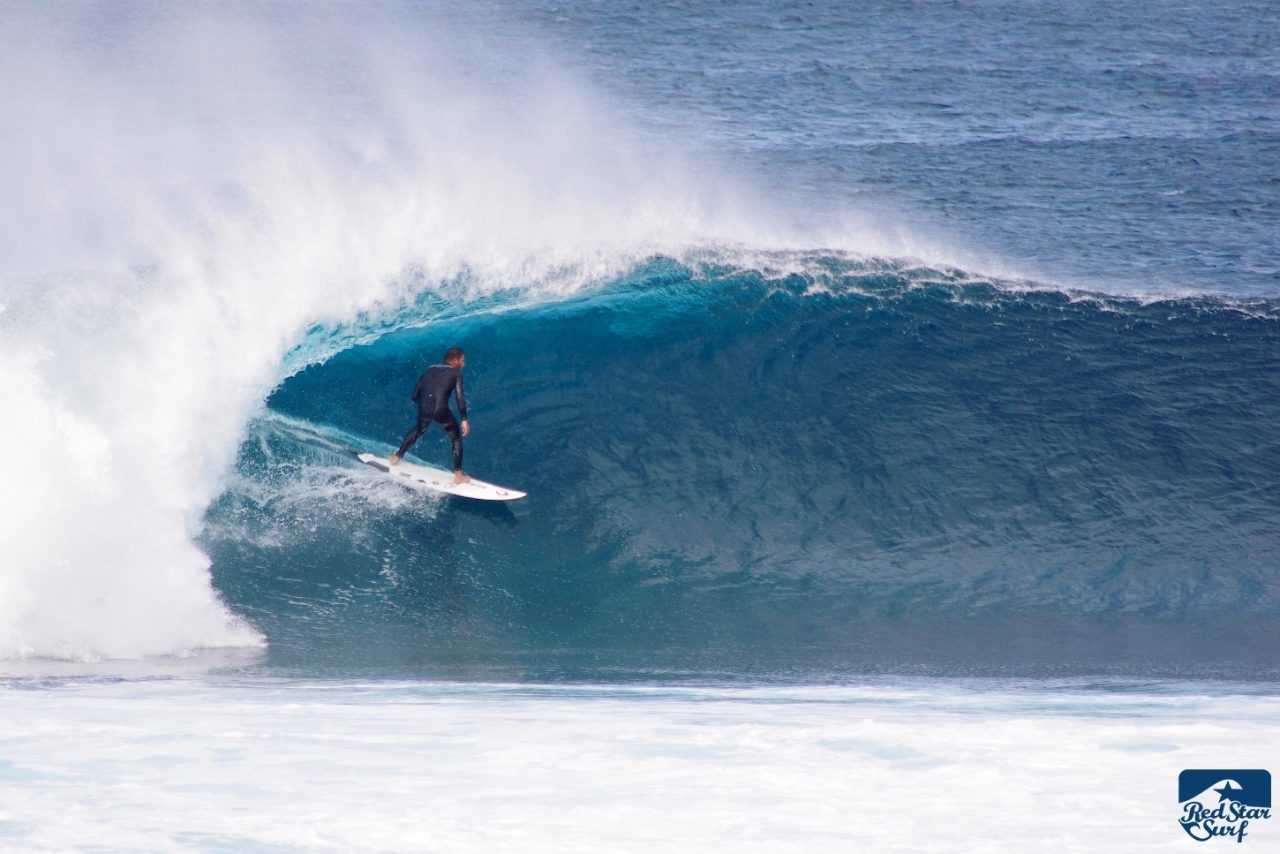 A surf spot where the waves break over sandy bottom; more beginner friendly because of reduced risk of injury but also harder to read the waves.

The turn that is made at the bottom of the wave. 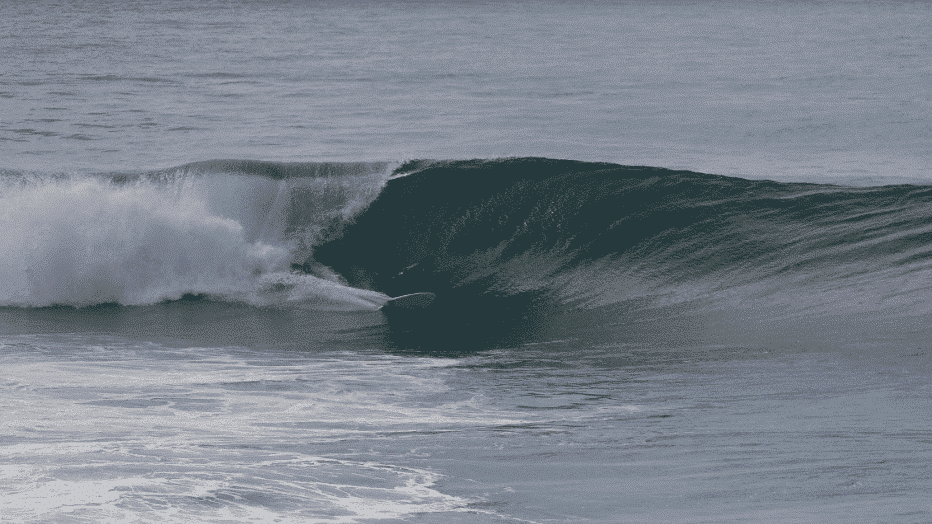 Bottom Turn on a wave in Lanzarote – (Source : REDSTARSURF).

Bad surf conditions due to wind.

The part of the swell that breaks creating surfable waves.

A sharp turn on the face of the wave whereby one of the rails of the board are submerged in the water. 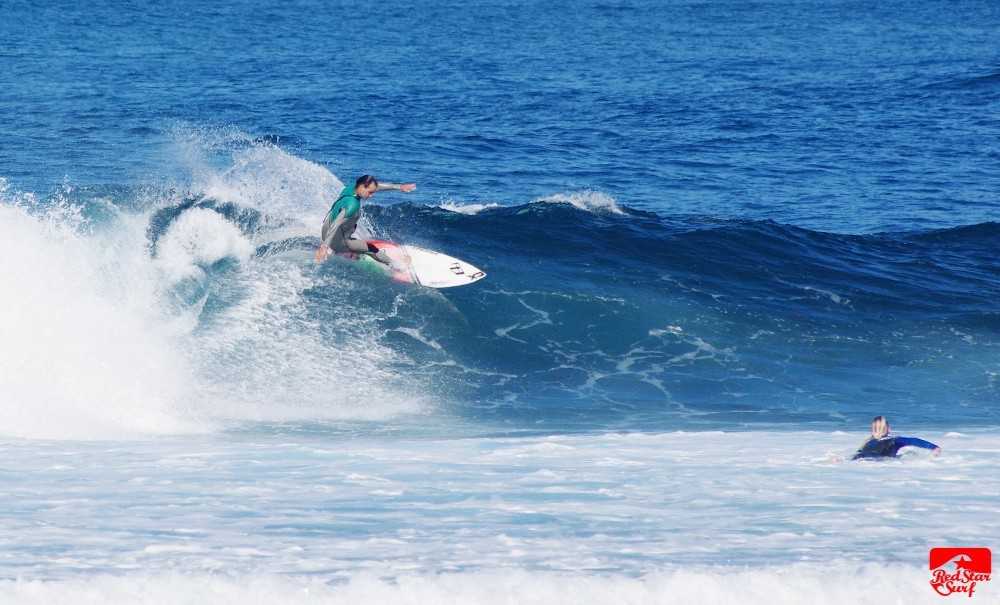 Being caught or stuck between the shoreline and the breaking waves.

Deeper area of the ocean floor where waves tend to be smaller, making it easier to paddle out. 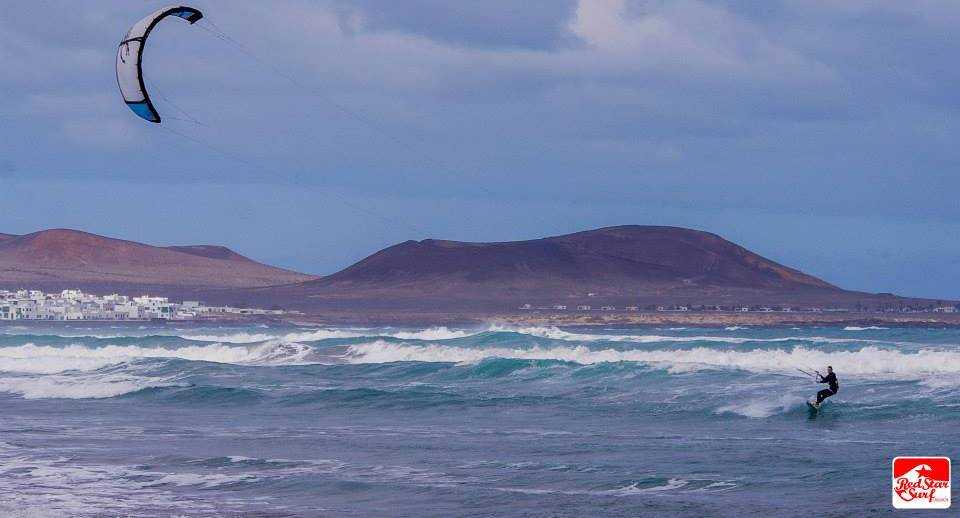 When a wave breaks all at once without a wall.

The top part of a wave, that breaks towards the shoulder of the wave.

A cutback is a manoeuvre, where you turn the board back towards the pocket, ideally hit the curling lip and turn back into the wall. This basic manoeuvre gives you speed for the next turn. 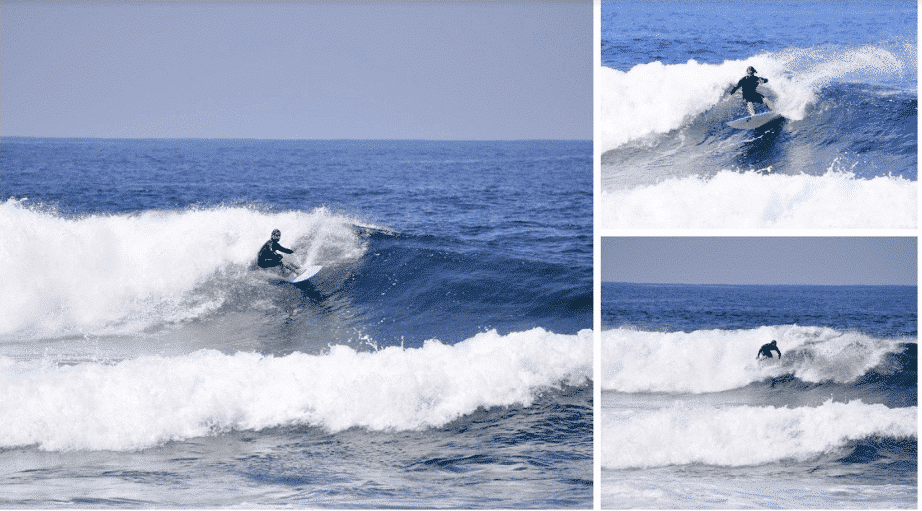 The top part of the surfboard.

Damage done to your surfboard by dropping, collision etc.; dings should be dried and repaired to prevent the surfboard from filling with water.

The first part of a ride, after popping-up the surfer “drops” down the face of the wave.

To get in the right of way of a surfer who is already surfing a wave. 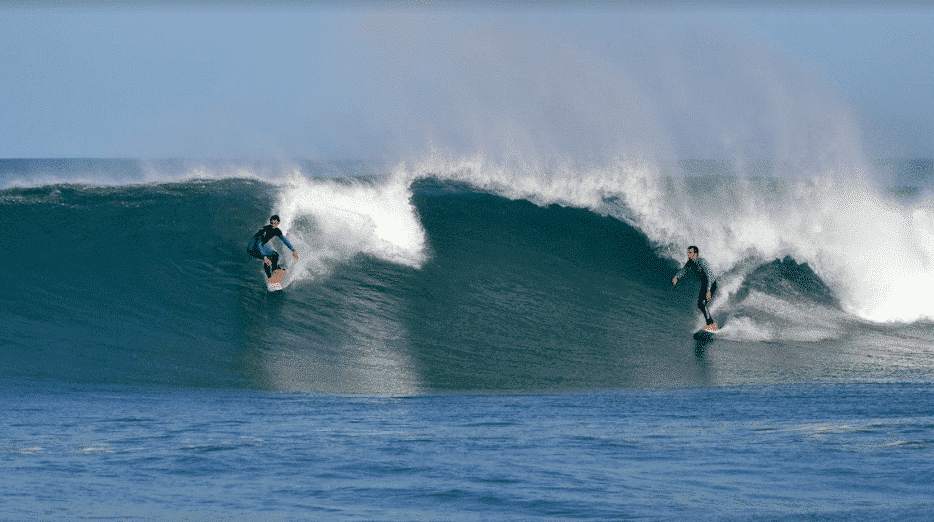 The technique of pushing a surfboard underwater before a breaking wave in order to make it out to the line-up. Dick-dives are usually performed on shortboards.

The technique of rolling over with a surfboard that gets a surfer through a wave without being washed to shore. Eskimo Rolls are usually performed on longboards and funboards; same as Turtle Roll.

The surfable part of a wave, that is just about to break. The face of a wave is the place for turns and manoeuvres.

Rudderlike devices attached to the bottom of a surfboard. Fins provide the ability to steer, give the board speed and direction. Fins are usually used in sets of three (see Thruster).

A rounded, short and wide surfboard design, that is easy to paddle and allows to surf mushy waves, while allowing maneuverability and speed (5-6ft).

Tiny or no waves at all. We are so happy to be based in one most swell consistent places in Europe. Flat days are extremely rare in Lanzarote.

Foamies are soft beginner surfboards constructed out of foam (7-9ft). Very safe and easy to surf. Beginners should always start to learn how to surf on a foamie. Watch out, surf schools, where the lessons take place on hard boards, should not be considered as professional. 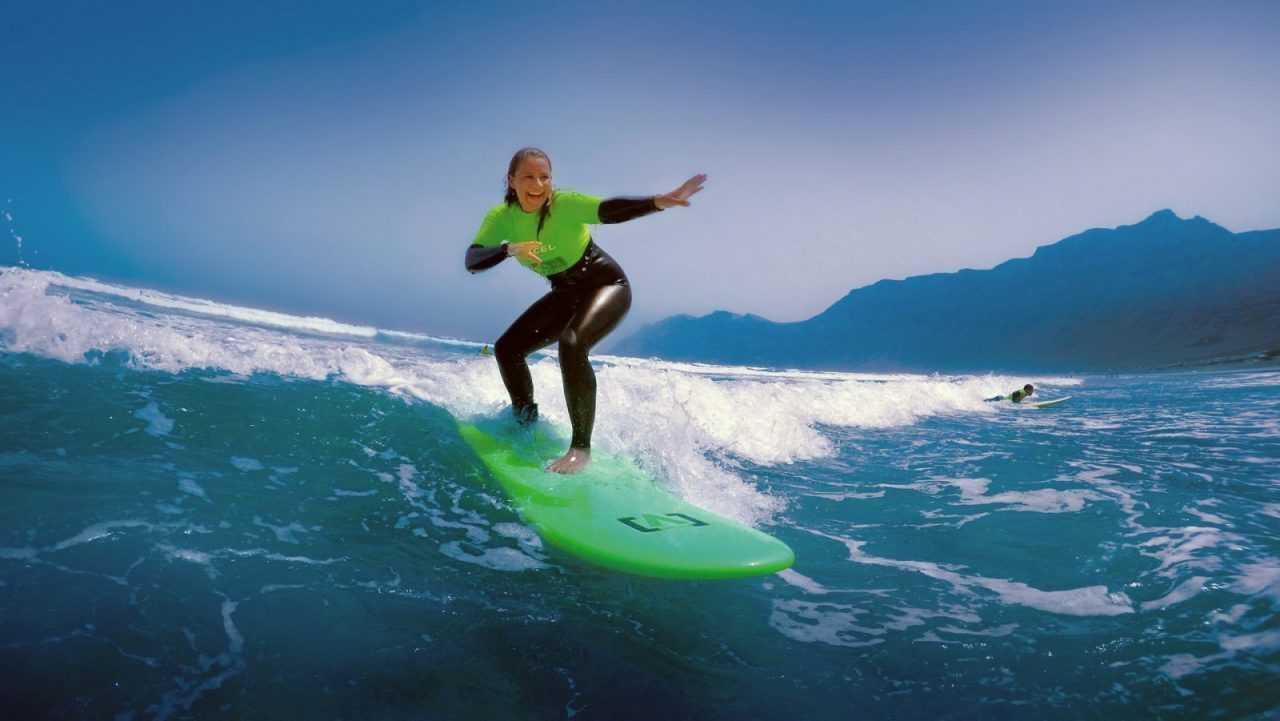 Surfing with a foamie – (Source : REDSTARSURF)

The position when surfing a wave facing the wall with your chest.

A medium length surfboard with a round nose usually ranging from 6’8 to 7’10 feet long.

The smooth surface of a wave, when no wind disrupts. Perfect surf conditions.

Surfing with the right foot forward on the board.

The inside of a barrelling wave. The place to be. 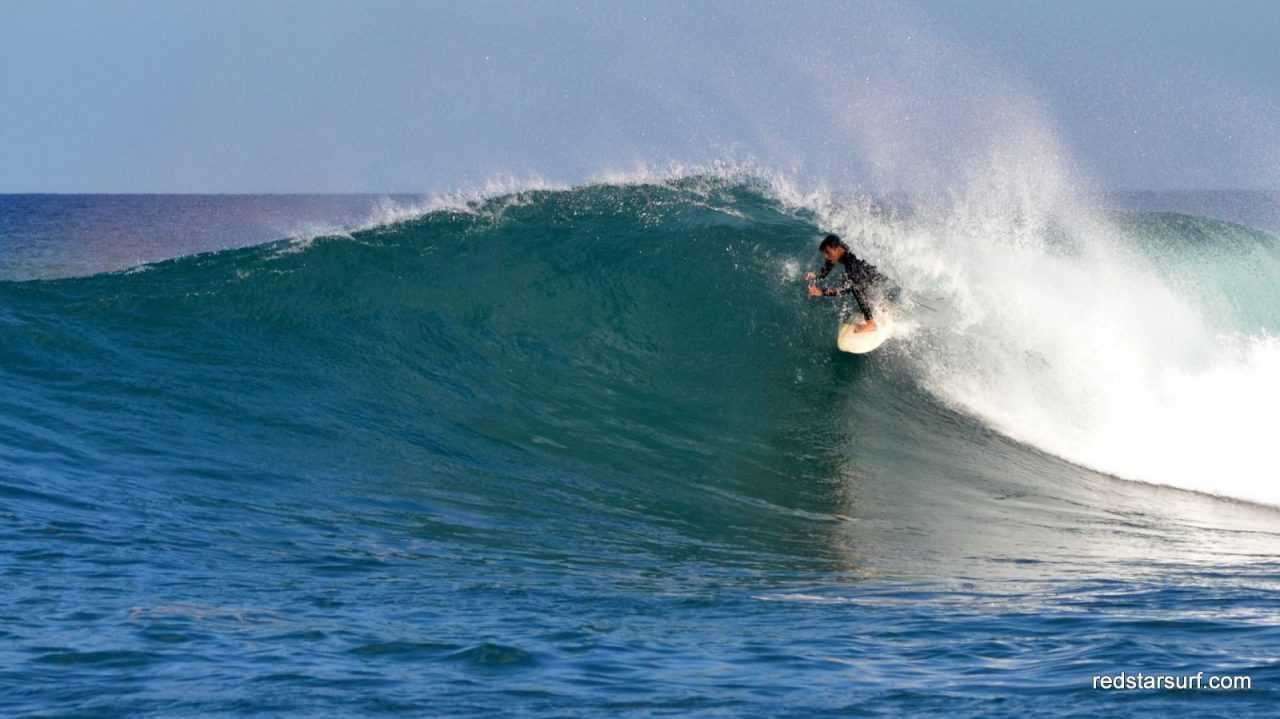 A surfer inside the green room – (Source : REDSTARSURF)

An unbroken wave that has hit a sand bank or reef, opening room for a ride.

Swell that travelled a long way through the ocean, created by storms offshore and usually creating powerful waves.

A young surfer; aka grommet.

A big, pointy surfboard made specifically for big wave surfing and usually designed for a specific wave (i.e Mavericks gun or Waimea Gun); aka rhino chaser.

Riding a longboard with 5 toes off the nose of the board.

A Hawaiian expression for an easy-going attitude; see shaka.

Riding a longboard with all 10 toes off the nose of the board.

A surfboard design that combines the high performance of a shortboard with the width, tail, and sometimes nose of a fish. A hybrid is a good choice for mushy waves or for surfer seeking extra volume.

Impact zone is where the waves break. Avoid the impact zone when paddling out.

Anywhere between breaking waves and shoreline.

To go over or through the back of the wave when ending a ride. 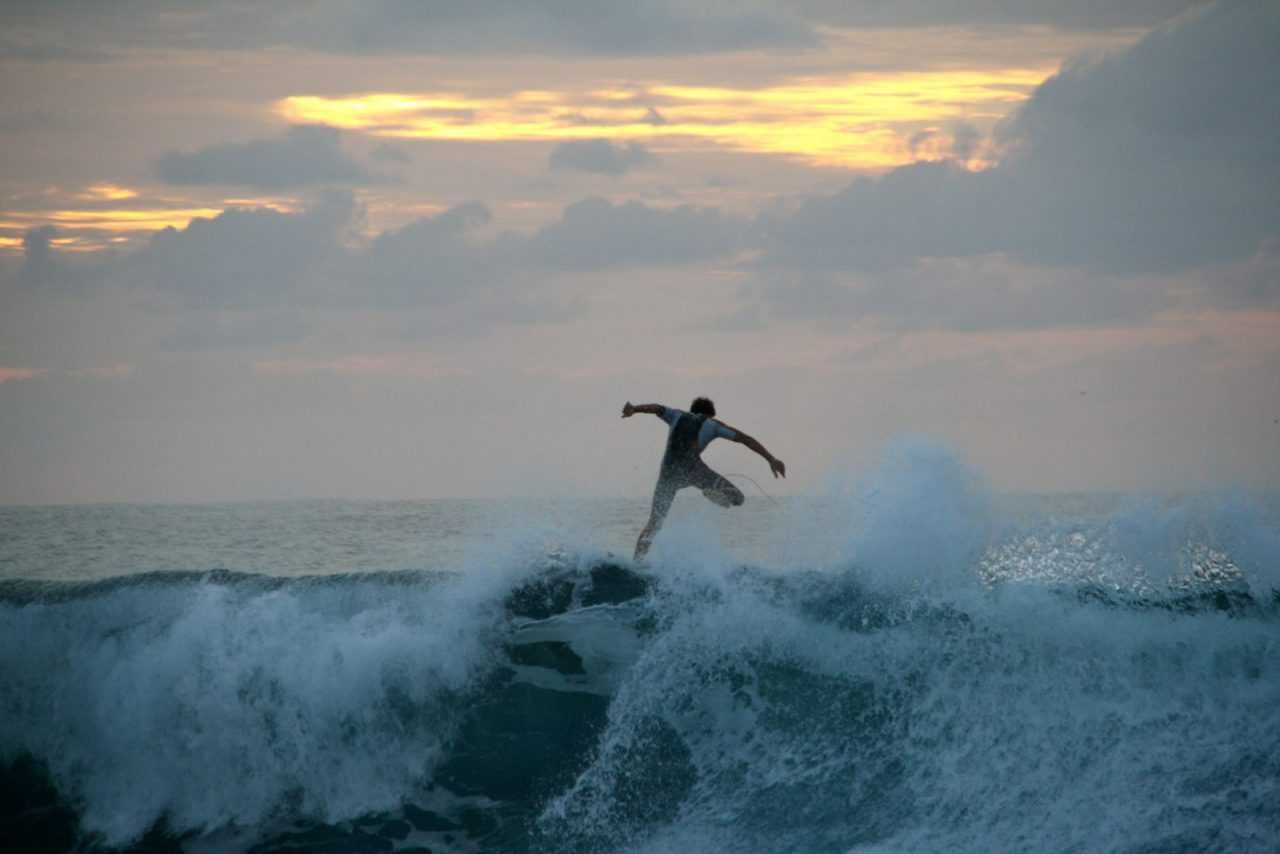 A surfer, acting inappropriately according to the surfing etiquette. Usually, a kook has a very low surfing level, absolutely clueless about being a hassle or even a hazard for other surfers in the water. Furthermore, a kook can be somebody, who doesn’t understand surfing culture or lifestyle.

A wave breaking to the left from the surfer’s perspective. A wave breaking to the left from the surfer’s perspective – (Source : REDSTARSURF)

The spot where the waves break. Surfers line up in order to catch waves.

The lines of waves, approaching the shore.

The part of the wave that pitches out as it breaks; where most of the power is located. 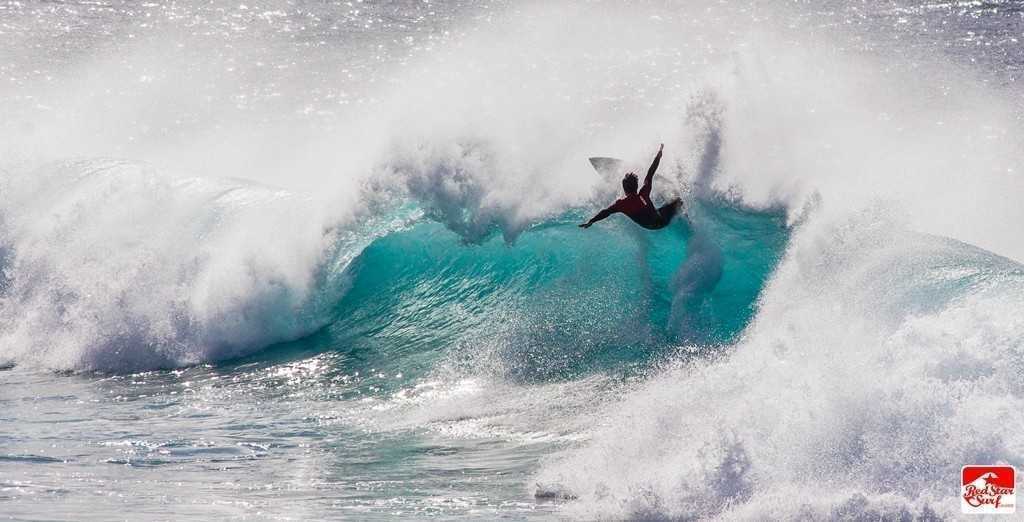 A surfer that touches the lips of the wave during a maneuver – (Source : REDSTARSURF)

Long surfboard, 9 ft or more with a round nose. Longboarding is the classic style of surfing.

Non-powerful waves, too soft to surf.

The front part of the surfboards, differs with shapes.

Digging in with the nose of your surfboard into the wave during take-off.

Best wind for surfing. Wind is blowing from the shore into the ocean, slowing down the wave, making it hollower and smoothing its surface. Perfect for barrels.

Wind blowing from the ocean to the shore, usually destroying the waves, creating chop. 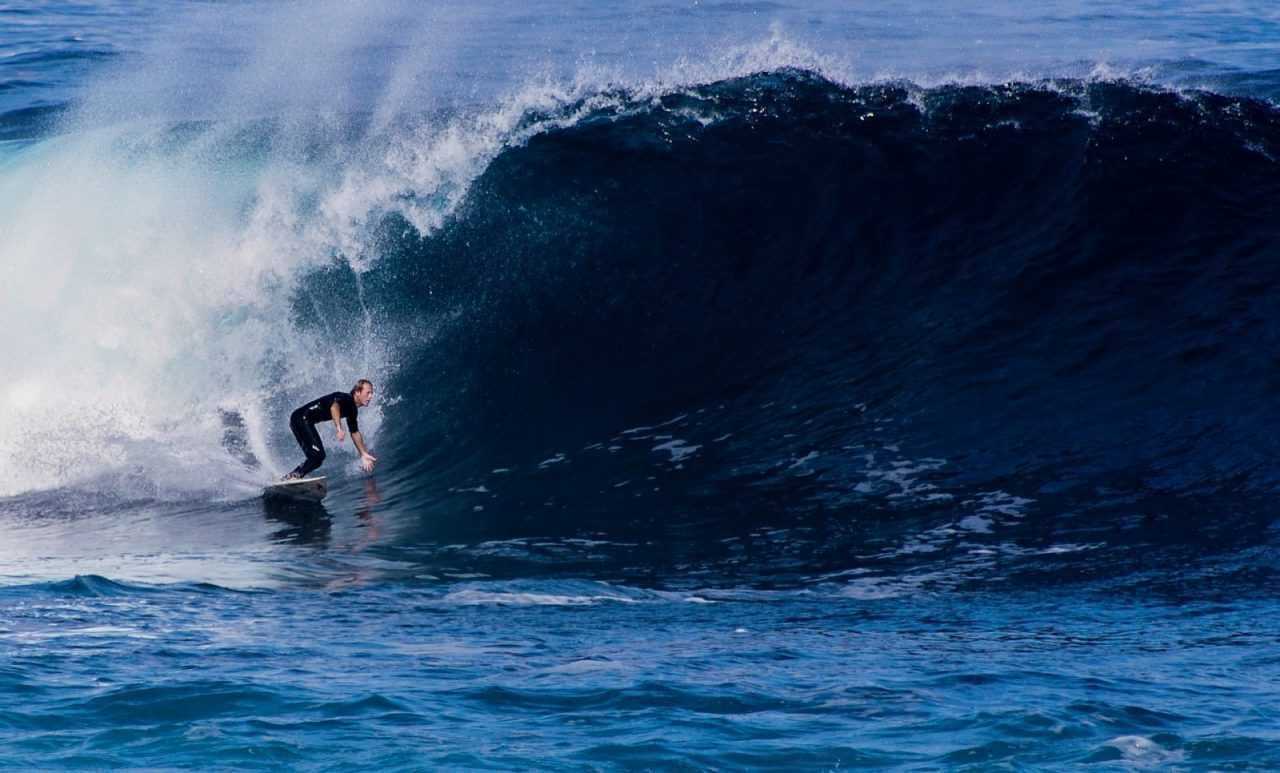 The highest part of a breaking wave, creating both left and right shoulders to ride. 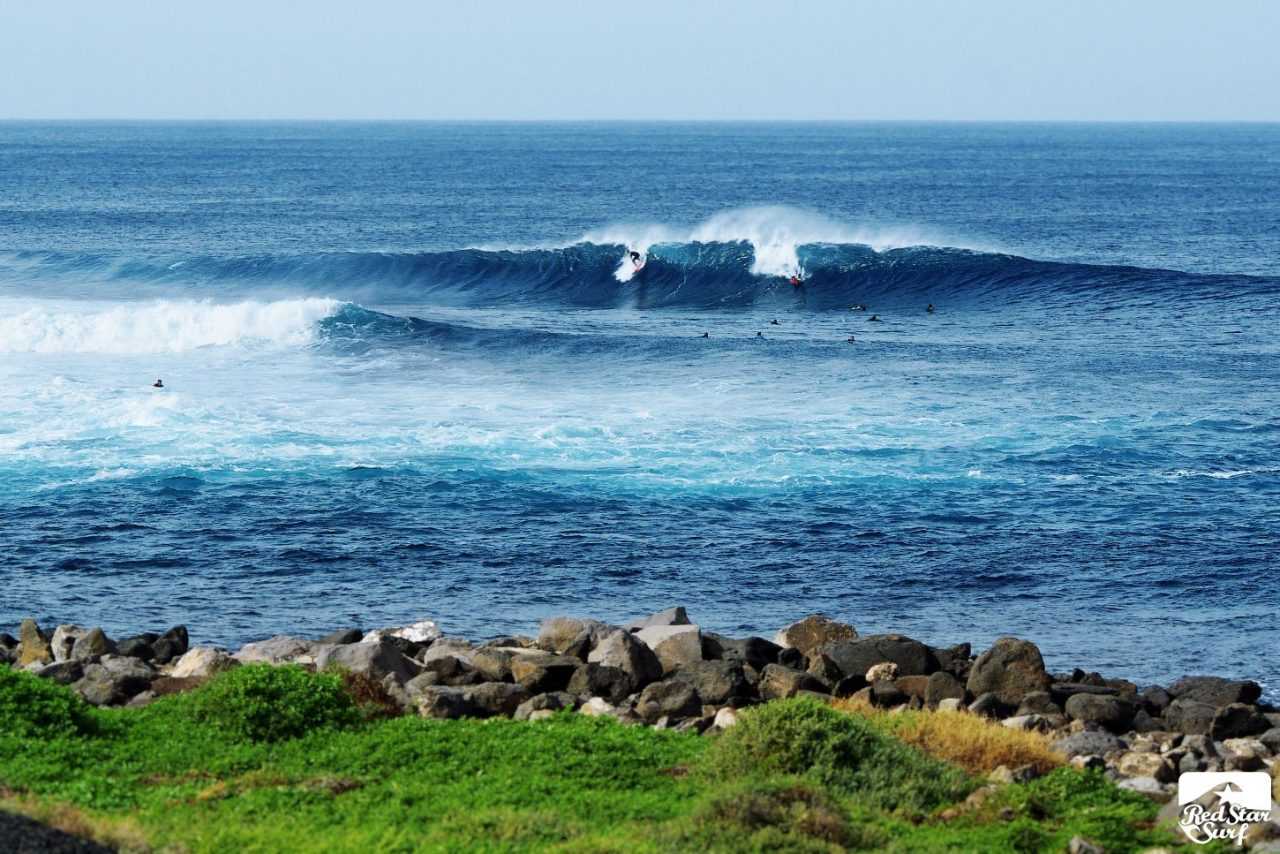 The most hollow part of a barrelling wave. 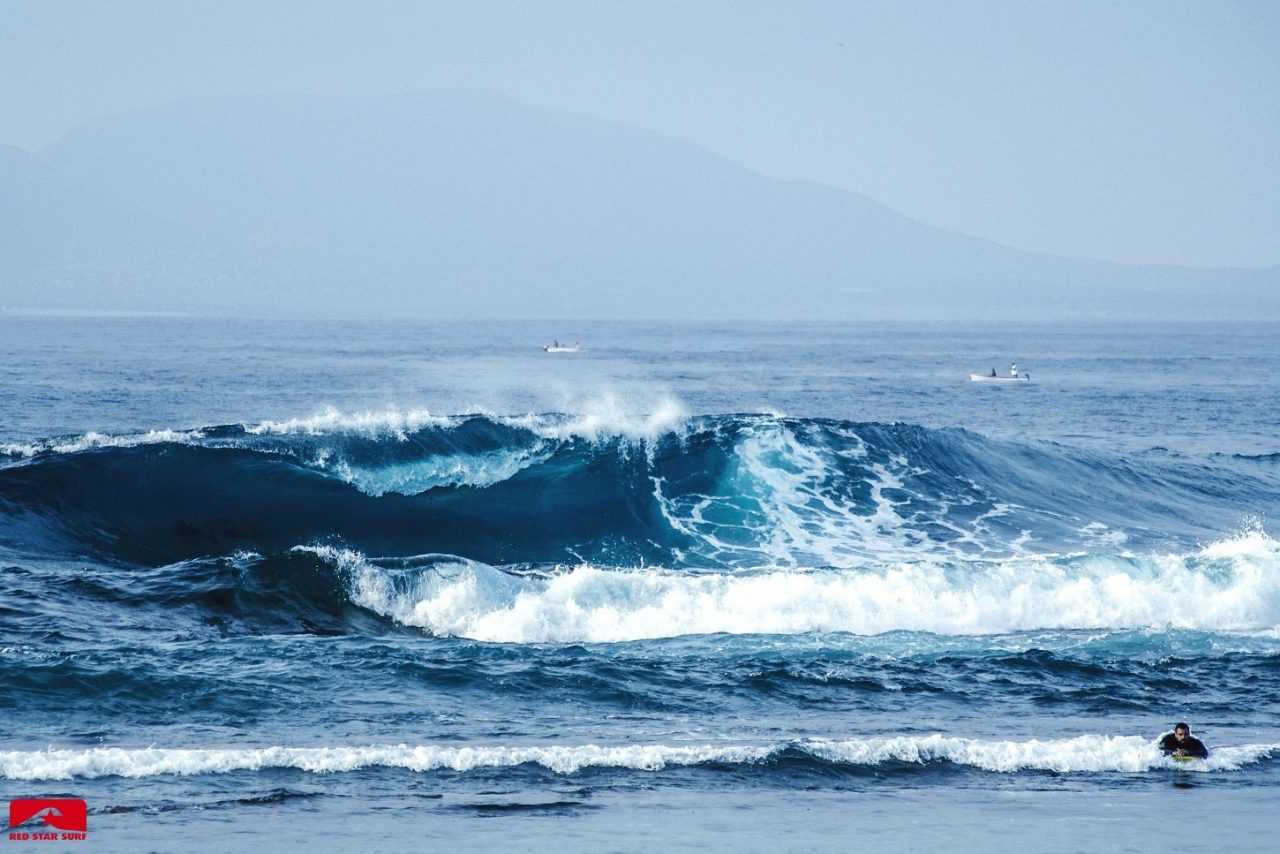 When a surfer gets barrelled.

Pocket also called wave pocket is the most powerful and steepest part of the wave, just next to the breaking lip. Progressive surfers surf very close to the pocket, in order to execute more radical manoeuvres, generating more speed.

Point-break is called a type of wave which breaks on land or rocks which are part of the coastline. Waves usually wrap around a point-break. In conclusion, point-breaks can be either lefts or rights.

The move a surfer performs to get into standing position on the surfboard and surf the wave.

Great surf conditions. Doesn’t have to be big, but nice and consistent.

A wave created by a previously broken bigger wave further out. The white water of a broken wave continues travelling towards the shore. When it hits the next sand bank, or reef, it begins to reform, and to break again. That’s a reforming wave. Usually it’s much smaller and weaker than the previously broken mother wave. This makes reformers very popular amongst beginner surfers.

Surfing with your left foot forward (opposite: goofy). 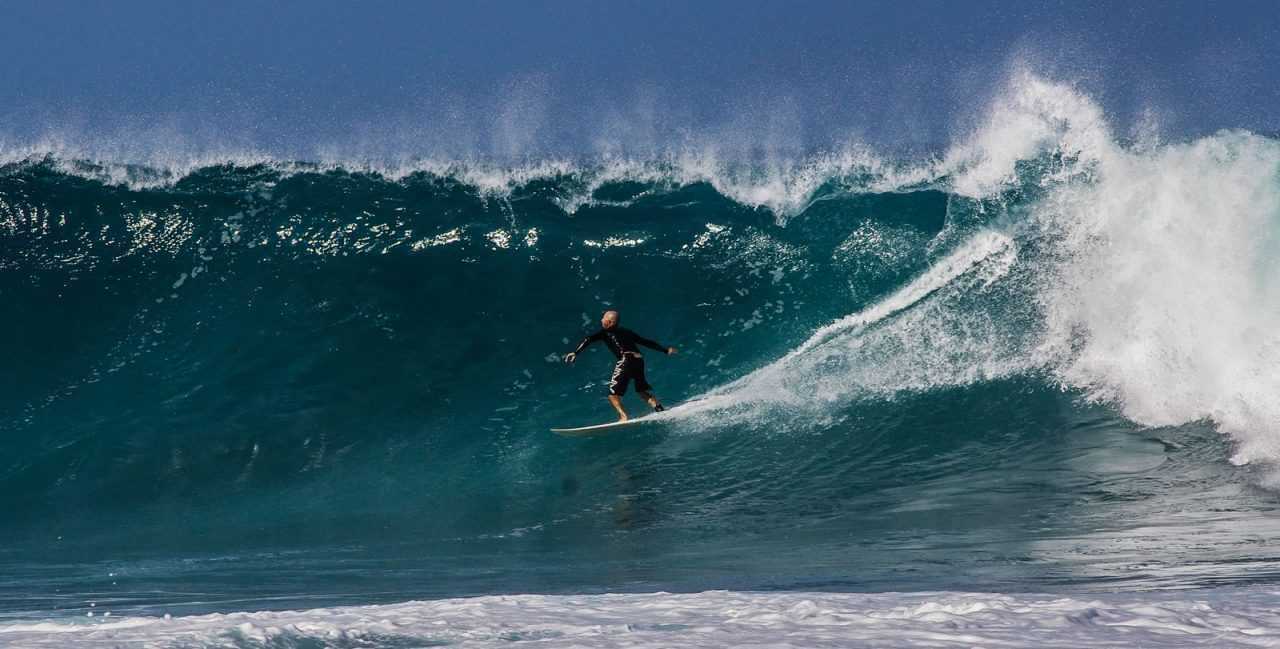 A wave breaking to the right from the surfer’s perspective. 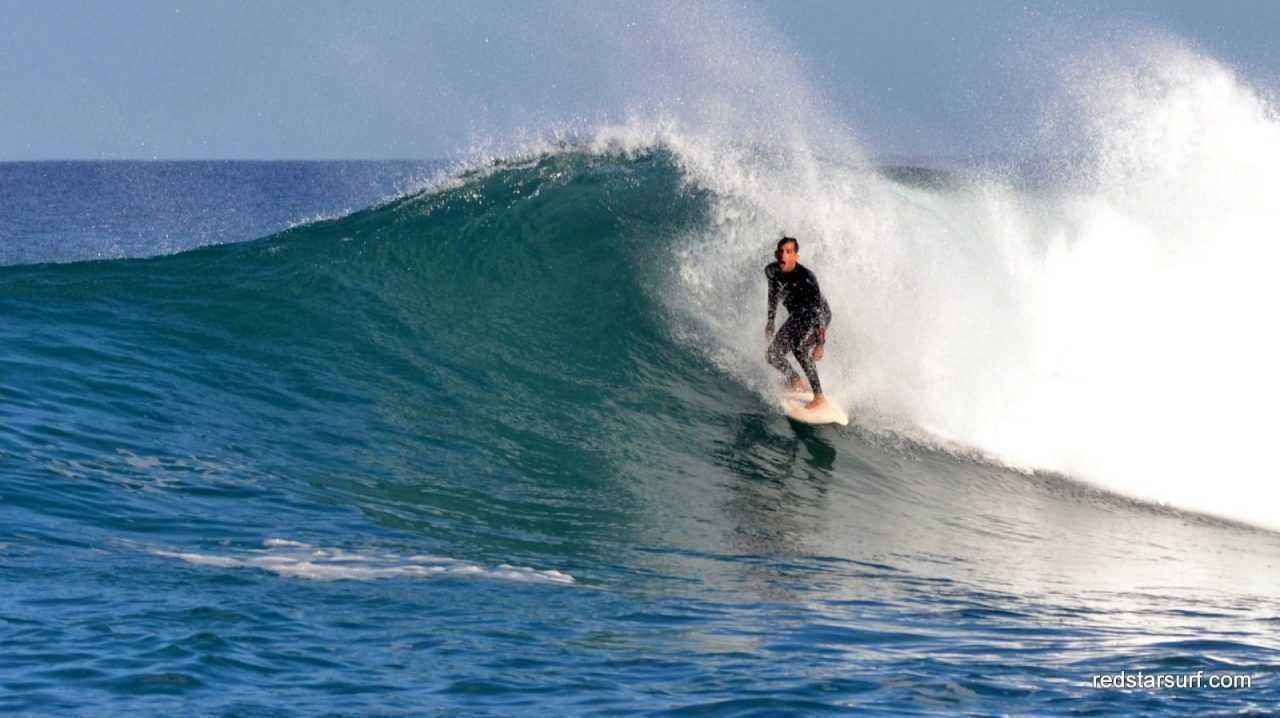 A wave breaking to the right from the surfer’s perspective – (Source : REDSTARSURF)

Priority for a wave given to the surfer closest to the breaking part of the wave.

A strong surface current flowing from the shoreline into the sea aka rip current or rip.

The curve of the surfboard from nose to tail, or from one rail to another. Low rocker makes paddling easier, good for fat beachy waves. More rocker makes the board more manoeuvrable. Equally important are the nose and the tail rocker. Nose rocker, f.e. prevents nosediving in hollow waves. More info about rocker in surfboard design.

A segment or part of a wave. A section can be fast, slow, hollow, fat, or close out. A wave usually has several sections.

A group of waves, heading towards the shore.

A Hawaiian hand gesture used by surfers to express “hello”; “cool”; “great”; done by extending their thumb and pinkie finger. 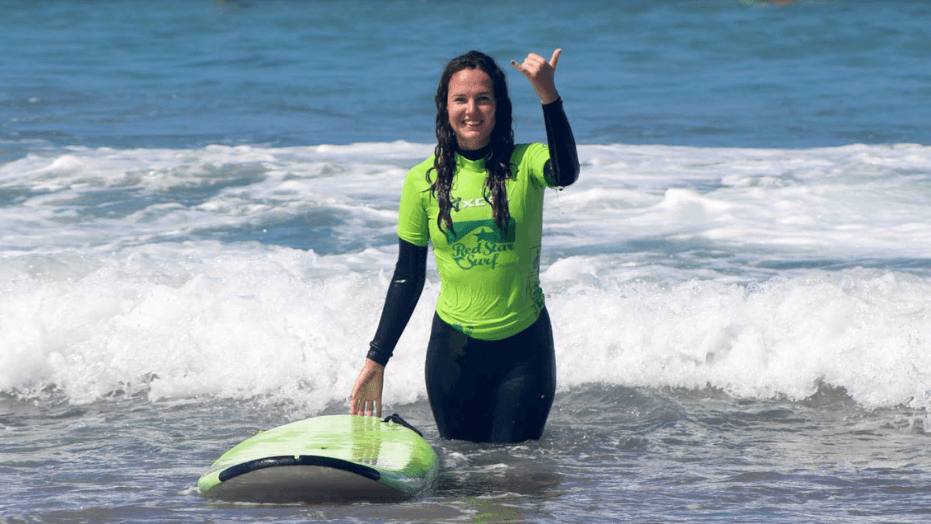 When talking about a wave: A term describing the quality of a wave as it breaks.

When talking about surfboards: A shape means the design of the surfboard.

A designer and producer making custom made surfboards.

A short surfboard ranges from 5 to 7 feet, usually with a pointed nose, designed for performance surfing with radical manoeuvres. 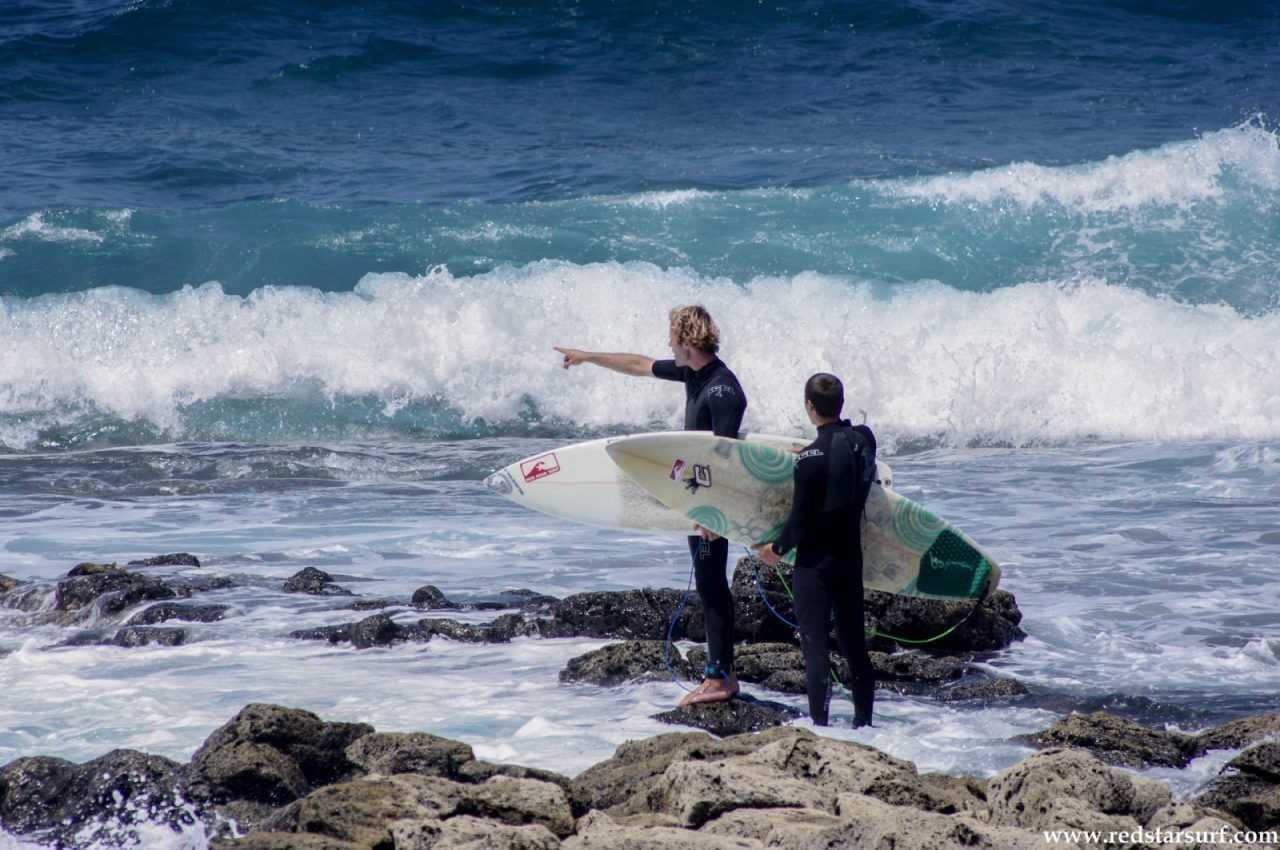 Moving the surfboard 180° or 360° under the surfer while riding. 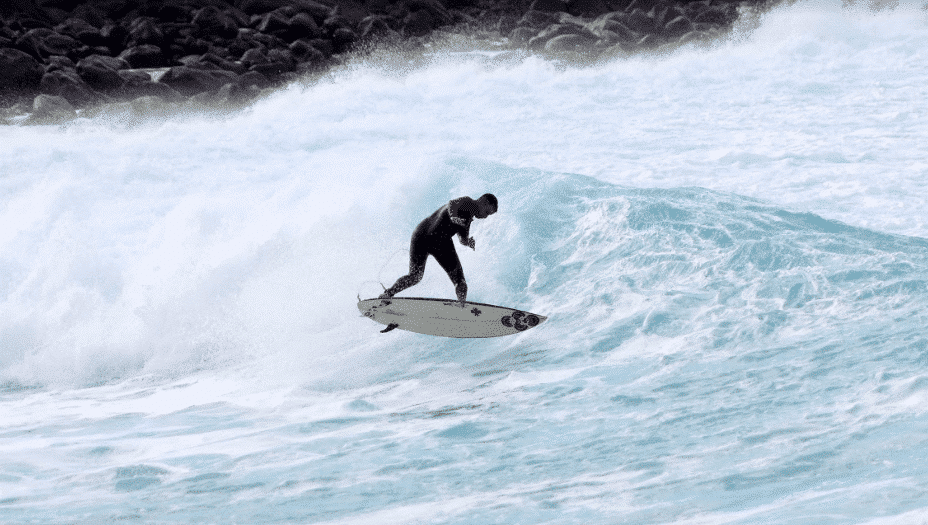 A surfer, perfectly situated inside a barrel.

Paddling around, under or over another surfer to get right of way; a way of “stealing” a wave. If you snake, most probably you won’t make yourself popular among other surfers in the water.

The foam of a wave or whitewater. Comes usually straight after the washing machine.

When a surfer exits a barrel getting pushed from the back by the water splash from inside of the barrel.

Water that is sprayed out from the inside of a barrel as the wave breaks.

A stick is another word for a surfboard.

Pumped, extremely happy or excited. The Stoke is also excitement or enthusiasm. 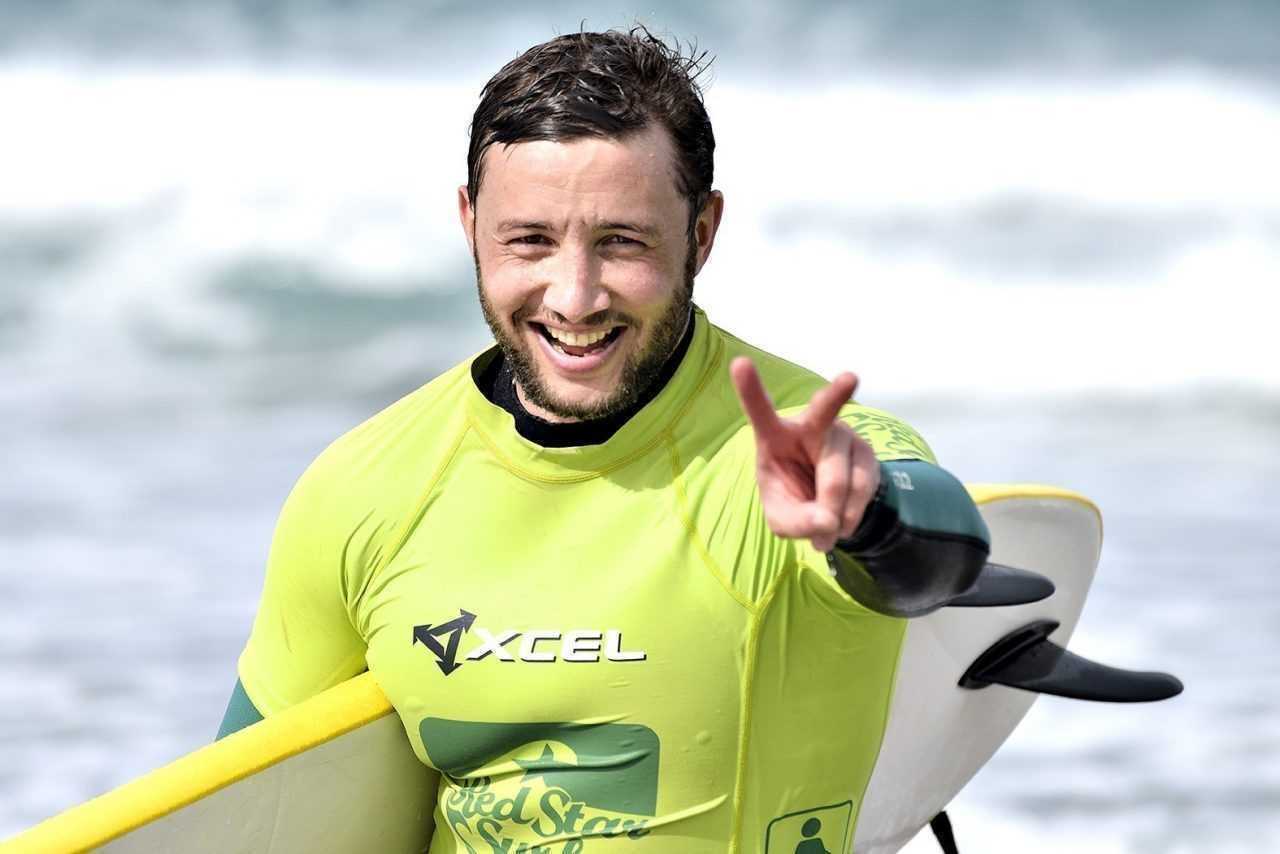 The small wood band incorporated along the board, acting as a spine. One of the main components of a surfboard, essential for the solidity of the surfboard.

Basically swell refers to water masses, travelling through the ocean. The swell can come from different directions and can be differentiated into groundswell or wind swell. Swell influences wave height, shape and power.

The back end of a surfboard.

A three-fin surfboard design created in 1982 by Simon Anderson; the most common fin setup today allowing control and maneuverability. 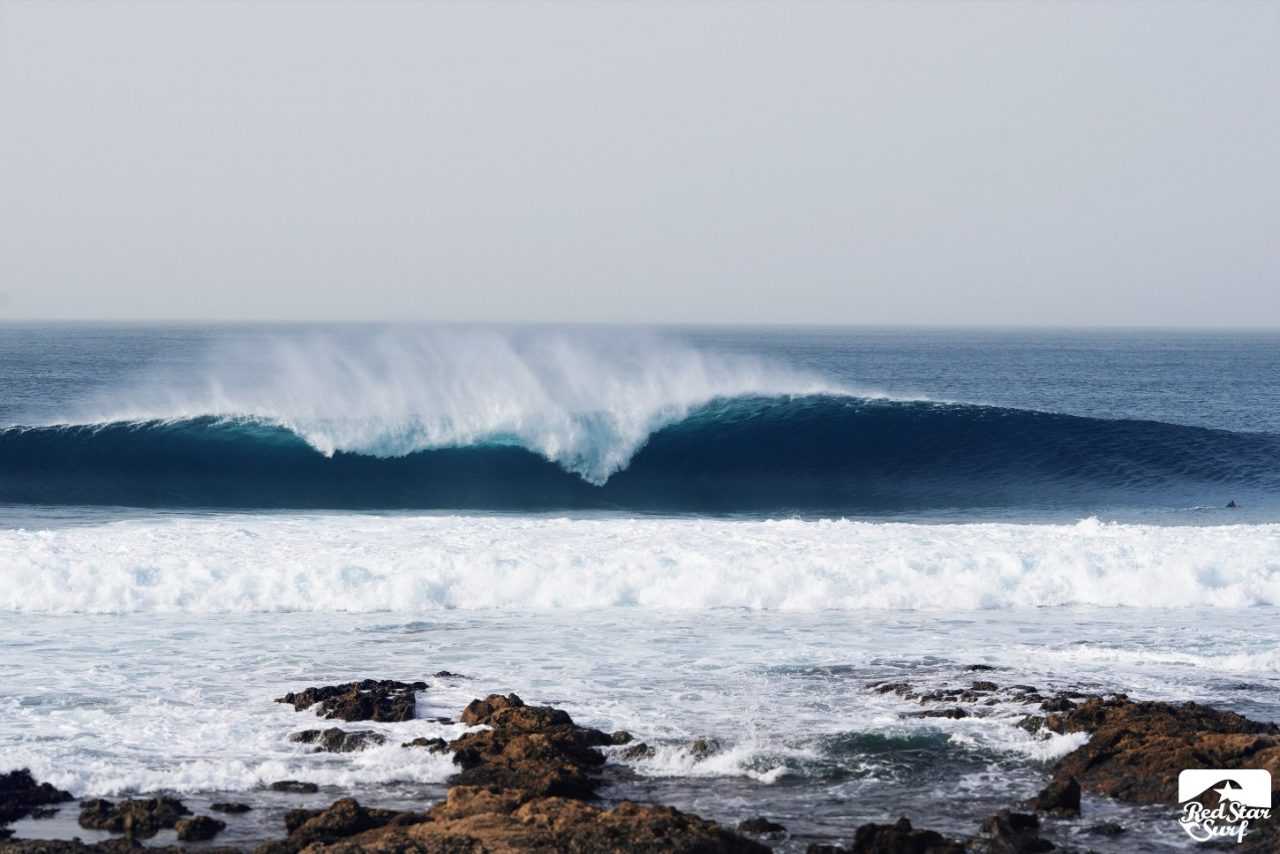 A tube in Lanzarote – (Source : REDSTARSURF)

The technique of rolling over with a surfboard that gets a surfer through a wave without being washed to shore; see also Eskimo Roll.

Another word for a face of the wave.

Being rolled-around underwater by a breaking wave.

A substance used to rub on the deck of a surfboard for better grip.

The foam of a breaking wave.

Falling off a wave while surfing it.

Being knocked off a wave and going through the washing machine.

If you like this surf glossary, feel free to look at our other pages to learn more about Lanzarote and surfing and become an expert!

By continuing to browse the site you are agreeing to our use of cookies.