THE DIFFERENT STAGES OF HISTORY

Surfing is a historic sport with a long and bumpy history.

Contrary to popular belief, surfing did not start in Hawaii but in Peru, during the pre-Inca period, under the Mochica culture

Drawings were found on pottery of this period, showing Inca fishermen riding ocean waves on wooden planks and boats made of reeds called the “caballitos de totora”.

Thus surfing was really born on the northern coast of Peru. Caballitos de totora are still popular with fishermen and tourists today.

Surfing history, as most people know it, started in the Pacific 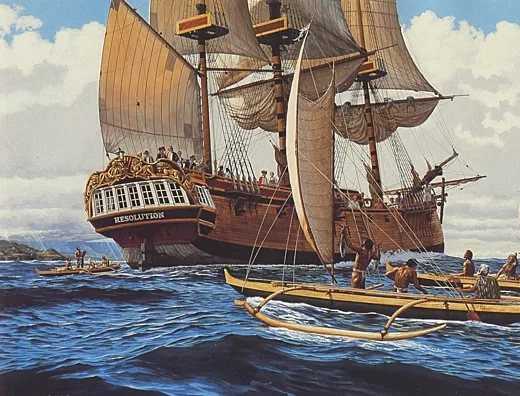 Captain Cook and his ships in Kealakekua Bay, 1778. (Source : https://www.surfingforlife.com)

The earliest records of the Hawaiian origin of surfing date back to 1769. During the first James Cook’s voyage on the HMS Endeavour, the botanist Joseph Banks first wrote about wave riding at Matavay Bay, Tahiti

Later, in 1778, on the 2nd trip Captain James Cook saw surfers at the Sandwich Islands (Hawaii). He started to write about surfing in his travel diary. But then he was killed by the inhabitants in Kealakekua Bay, who thought he wanted to kidnap their high chief.

So, it was his successor, Lt. James King, who described surfing, as he had seen it in Kahalu’u bay and Holualoa Bay on the Big Island of Hawaii, in more detail. He became passionate about surfing and surprised to see that is was not intended for any trial of skill, but purely as an amusement.

Lt. James King’s diaries mention that local inhabitants “seem to feel a great pleasure in the motion which this exercise gives”. 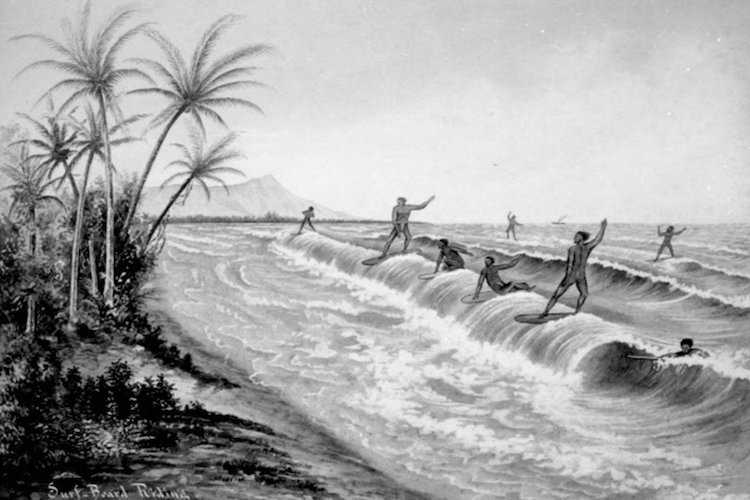 Hawaiian surfing as it was represented before (Source : https://doskimag.ru) 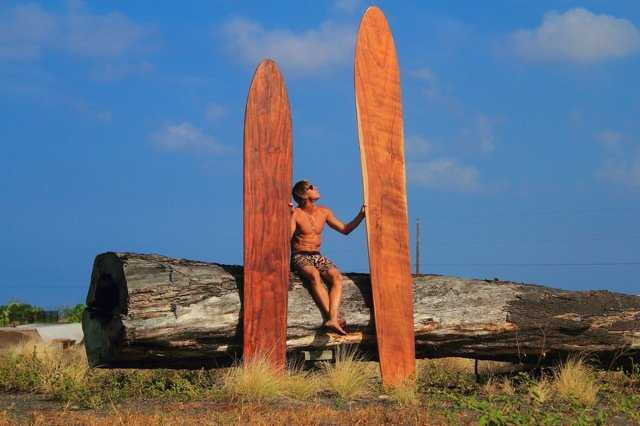 Papa-he-nalu boards made of wood and often more than 5 meters. (Source : https://blog.theperfectworldfoundation.org)

Surfing as a Spiritual Activity

Surfing had been a common practice among the people of the Hawaiian Islands since the 15th century. It allowed the tribal chiefs who challenged the sea to prove their power and superiority. They were surfing large boards, called Papa-he-nalu. They  were cut from a tree trunk according to an ancient ritual. The Polynesians, meanwhile, challenged each other in surfing duels, the winner being granted a better place in the tribe. Surfing became a spiritual activity for them and was deeply rooted in Hawaiian religion and culture.

The Destruction of Hawaiian Surf Culture

The publication of Cook and King’s travel books after their return to Europe resulted in attracting explorers and missionaries to the islands. Their arrival unfortunately led to disease, syphilis in particular, previously unknown in the islands. A reduction of the Hawaiian population resulted by 10%. The missionaries also established their religious and economic system in the islands. These factors led to the destruction of important elements of the local culture thus, nearly wiping out Hawaiian surfing tradition. 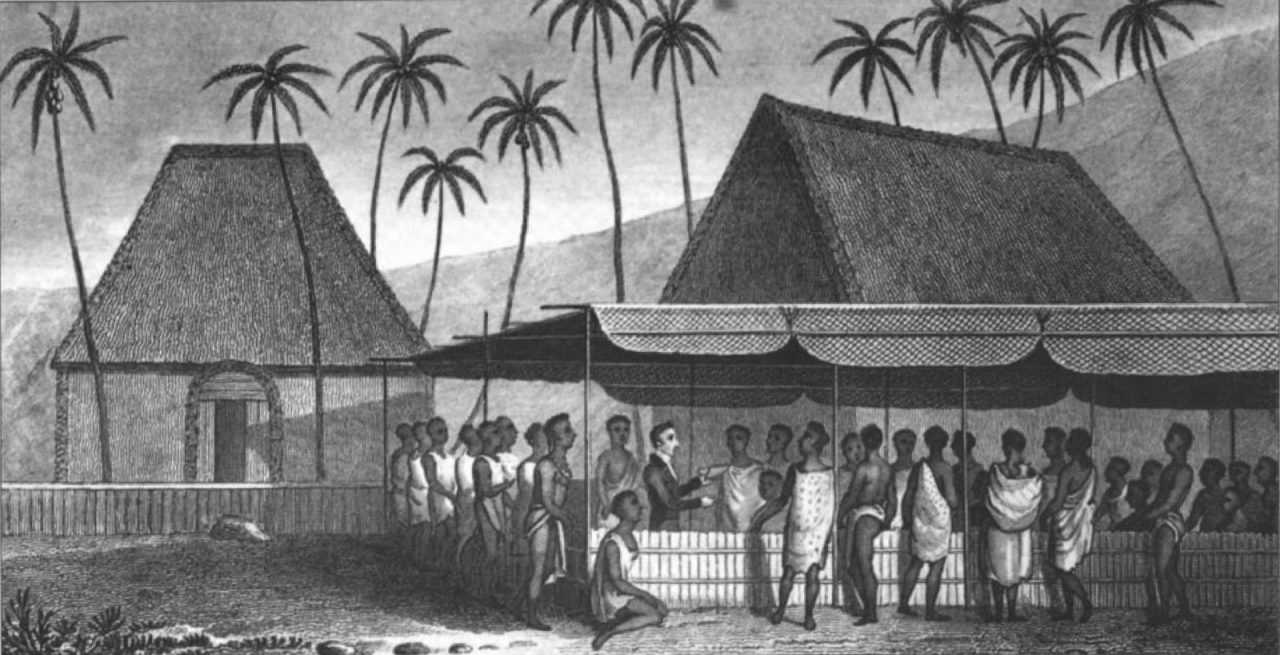 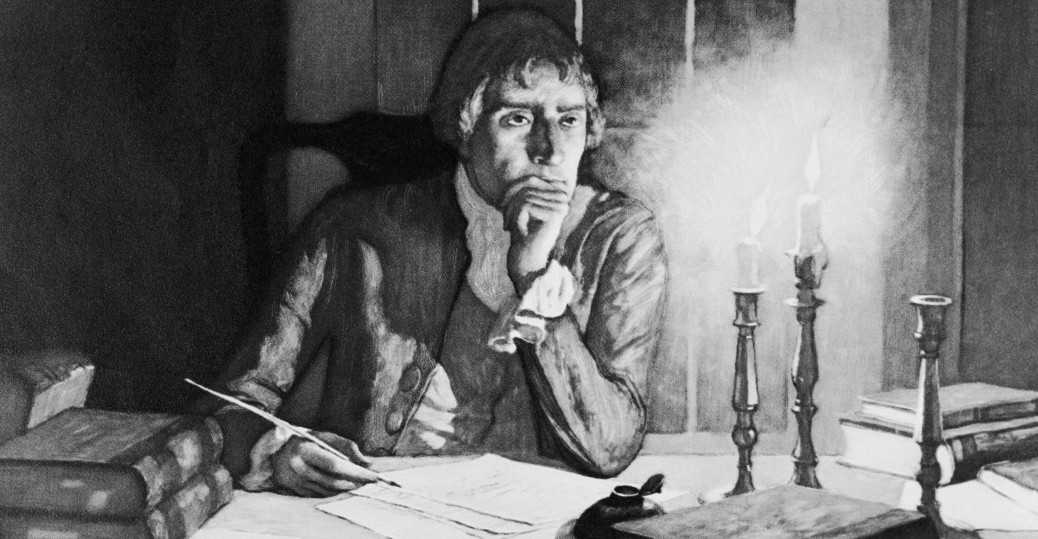 The Declaration of Independence was largely the work of Thomas Jefferson. (Source : https://www.history.com)

The Pursuit of Happiness

Around the same time that Cook’s and King’s travel diaries were published, the French and American revolutions took place. Around this time Thomas Jefferson wrote the Declaration of Independence of the United States. Some historians agree, that the addition of the “inalienable right to the pursuit of happiness” to that fundamental document could be due to the influence of surfing stories from Polynesia.

In 1885 three young Hawaiian princes escaped from their boarding school and came to Santa Cruz in California. There, they surfed the mouth of the San Lorenzo River on surfboards crafted from redwood.

The First Man to Surf in the USA

Following the annexation of Hawaii in 1898, the lost tribal tradition of surfing was revived in California. Joined efforts of writer Jack London and Alexander Hume Ford led to the invitation of Waikiki beach boy George Freeth in 1907. Freeth earned the title “First Man to Surf California”, when he came to promote the Redonodo Los Angekes Railway. The three men later opened the first surfing club in Waikiki, the Outrigger Canoe Club in 1911. 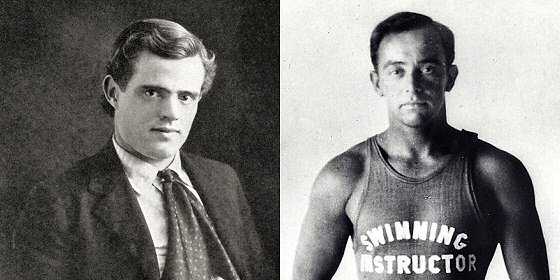 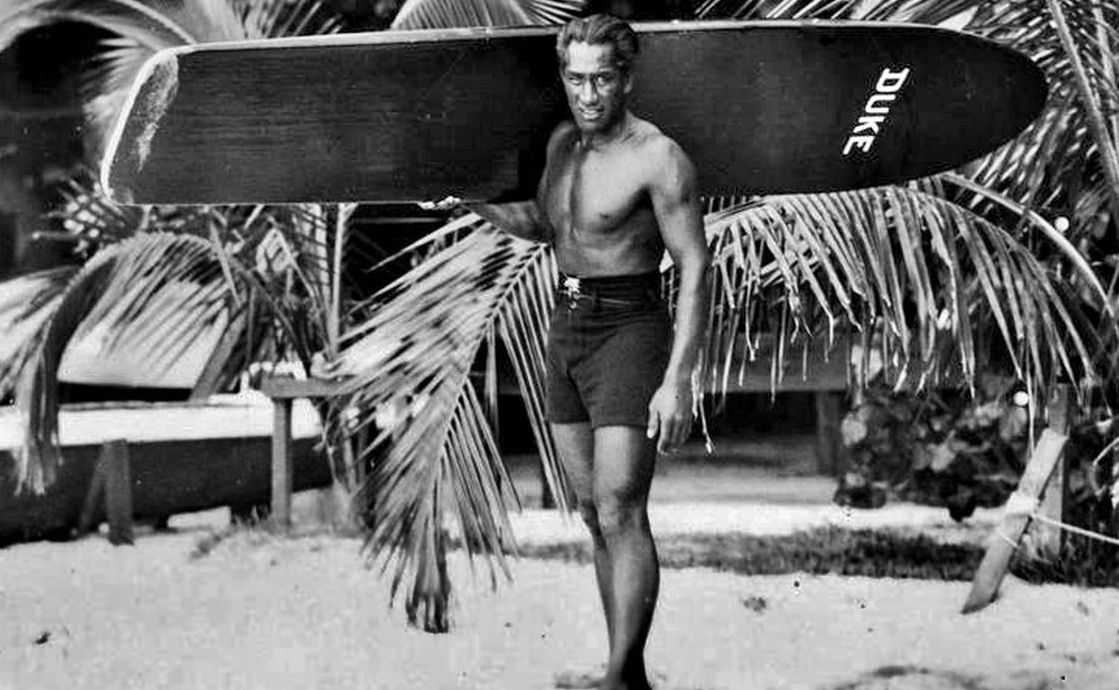 Duke Kahanamoku and his board. (Source :https://www.latimes.com)

The Father of Modern Surfing

It was Duke Kahanamoku who made the sport really come out on stage in 1912. The Duke was a pioneer among the many key personalities in surfing history. As a passionate Hawaiian surfer and Olympic record swimmer, his demonstrations in California caused a much greater frenzy than Freeth’s. Along with his Hollywood fame and surfing skills, he popularized the sport universally. Today, “The Duke” is the father of modern surfing. His appearances marked the begin of the American surfing era.

The surfing history in Australia is quite different from American.

During colonialism, a law prevented Australians to bathe and enjoy the sea and beaches. This law was revoked in 1903. As a result, Australians began enjoying the beaches. However, the sea remained a dangerous environment therefore, sea rescue organisations developed. The rescue training techniques quickly evolved into a sport in its own right.

It was at Manly Beach that everything started. First rescue demonstrations followed at the beach in  1903. The surf bathing association resulted from the foundation of the Bondy Surf Club in 1906 and nine rescue clubs in 1907. Then, in 1909 the first documentary film called “Surf Sports at Manly” was screened around the country. One year later, the Manly Surf Carnival attracted hundreds of spectators with surf and rescue drills by men and women. The founding members of Bondy Surf Club in 1906. (Source : https://www.surfertoday.com)

In 1910 Tommy Walker brought a 10-foot surfboard “bought at Waikiki Beach, Hawaii, for two dollars” to the Manly Beach in Sydney. Walker became an expert wave rider, and in 1912 he gave several surfing demonstrations in Sydney at the Freshwater Carnival. Then in 1914 the Olympic swimming champion Duke Kahanamoku was invited to the Eastern States in Australia for wave riding demonstrations in front of thousands of spectators at the Freshwater carnival. In 1915, he came back to surf in tandem with a young girl called Isabel Letham. Duke’s board is now on display at the Freshwater Surf Life Saving Club in Sydney.

Australia is a surfing nation. Many Australians enjoy the sport at their local spots and kids even learn surfing in PE lessons at school. The breaks in Australia produce some of the best surfers in the world such as Mark Richards and Mick Fanning.

Post-war pioneers Woodbridge Parker “Woody” Brown, Rabbit Kekai and John Kelly were the initiators of a new wave of surfing history in the 1930s, 40s and 50s. Materials used to make surfboards began to change, making them lighter, finer and more maneuverable.

The Free Spirit of Surfing

The 1950s marked the launch of the modern history of surfing, with surfers increasingly flocking to Hawaii. Characters such as Fred van Dyke, Peter Cole and John Kelly started surfing giant waves on the  Makaha spots, Sunset beach and later Waimea bay with local surfers like Eddie Aikau and Buffalo Keaulana. Surfing was becoming more and more mainstream in the 50s and 60s, as many artists and musicians learnt about surf culture, associating it with “flower power“. Surfing began to gradually move away from its macho roots thanks to the adventures of pioneering surfers like Eve Fletcher or Anona Napoleon. 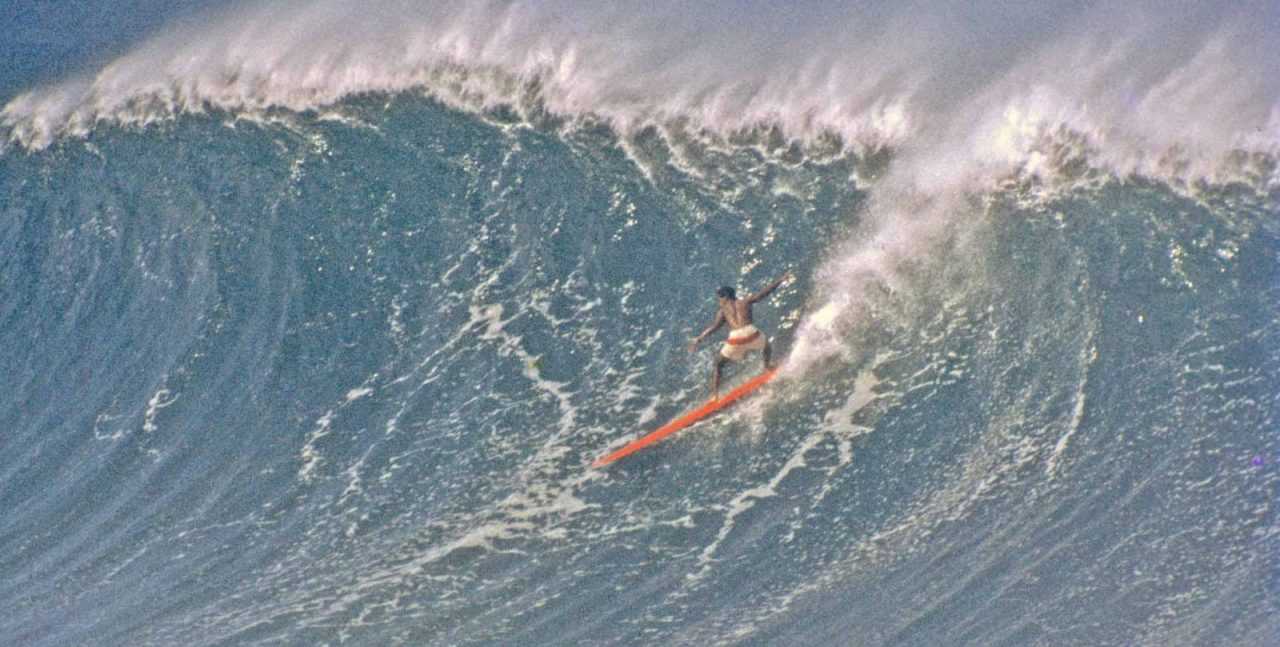 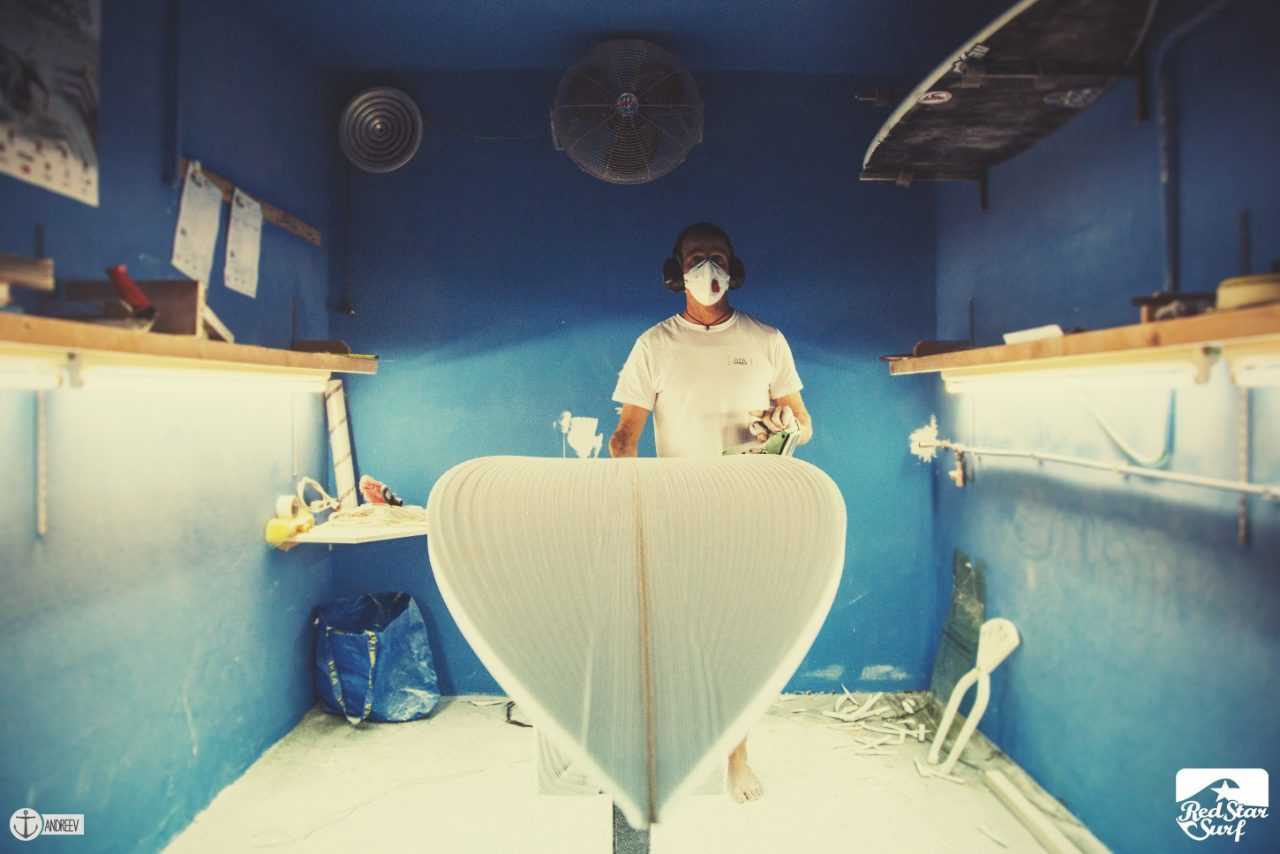 With the usage of plastic and composite materials and industrial manufacturing, surfboard design changed.  This replaced the hand-cut wooden boards of the old times. The invention of neoprene suits (by legendary Jack O’Neil) and leashes further contributed to wider spread of the sport. Surfboards have evolved considerably, with the appearance of the thruster fins, and new surfboards designs that allowed for ever more impressive maneuvers.

Finally, over the past 50 years, surfing has taken an unprecedented turn. Culture and style have changed. Great surfers like Tom Carroll with his ressive style, Tom Curren with his ability to surf big barrels began taking the sport to ever new heights.

Today, further growth of popularity of surfing is driven by world competitions between famous surfers like the 12 time world champion Kelly Slater, John John Florence, Gabriel Medina and many others.

Yet, despite the globalization, the newest technology, the growth of multiple surf clothing brands and other factors leading to commercialisation of surfing, it has been able to preserve a part of the spirit of the pioneers of surfing. Surfing is a state of mind, with no borders and no limitations.

Wherever there are waves, there are communities of surfers, who live its spirit and enjoy being close to the nature and harmony with the ocean. Nowadays it is a lot easier to start surfing. All you need to learn to surf and get acquainted with the surfing lifestyle, the pura vida, is to spend your next holiday in a surf camp. Fun and safe surfing lessons will introduce total beginners into this new world. Intermediate and advanced surfers who want to practice by themselves, can rent surf boards and enjoy catching waves on their own.

Our school RedStarSurf  is located in the village Caleta de Famara, Lanzarote, Canary Islands. Furthermore, we offer relaxing yoga classes to complement the physically demanding water sport of the kings!

By continuing to browse the site you are agreeing to our use of cookies.