DISCOVERY, WAR AND CONQUEST OF LANZAROTE

The first inhabitants: the Guanches

In order to understand Lanzarote History, one must learn about the people. The first inhabitants of the Canary Islands were the Guanches, an ethnic group related to the North African Berbers. Theories of their origin are plenty. Probably, the Guanches arrived on the island for field work by the Romans.

The first known record of Guanches was from the 14th century. It depicted them as a hunting and gathering society: living mainly off basic agriculture and livestock farming. They dressed in goatskin clothing, their diet was frugal, with staples such as gofio, goat and rabbit (take a look at our lanzarote food page if you want to learn more about this topic).  They lived in dry stone caves or huts covered with thatch. 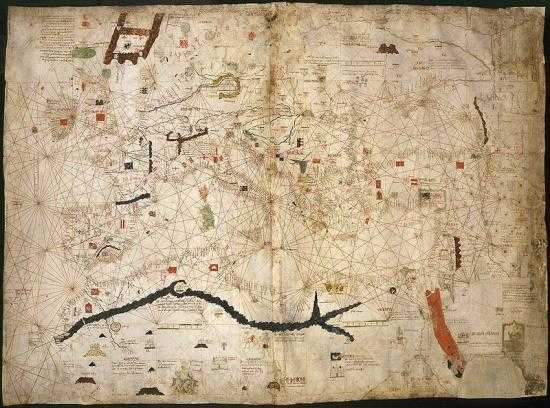 Discovery and conquest of Lanzarote

Genoese navigator Lancelot Maloisel, (in Italian, Lanzerotto Malocello) discovered the Canary Islands in about 1312. The island appeared on the European map, Atlas Dulcert, in 1339 under the name of “Insula de Lançarote Mallucellus”. The renaming of the island to Lanzarote occurred later.

The island’s name in the native language  (Tamazight, a lost Berber language) was Tyterogaka or Tytheroygaka, which is said to mean “one that is all ochre“, referring to the reddish tint of the island’s landscape.

At the end of the 14th century, other European expeditions took place. Mainly pirates came to the island. They aimed at capturing slaves or collecting Orchilla (a lichen used to make tincture). The definitive conquest of the island was made under the impulse of Spain’s King Henry III of Castile.

Jean de Béthencourt made a peace pact following negotiations with the last indigenous king of the time, Guadarfia. The pact was to ensure protection against pirates and slavers. As a result, the King of Spain granted Jean de Béthencourt the governance of Lanzarote. At the time, only about 300 Guanches remained on the island.

The discovery of Lanzarote by Jean de Béthencourt in 1402 – (Source : https://www.fodors.com) 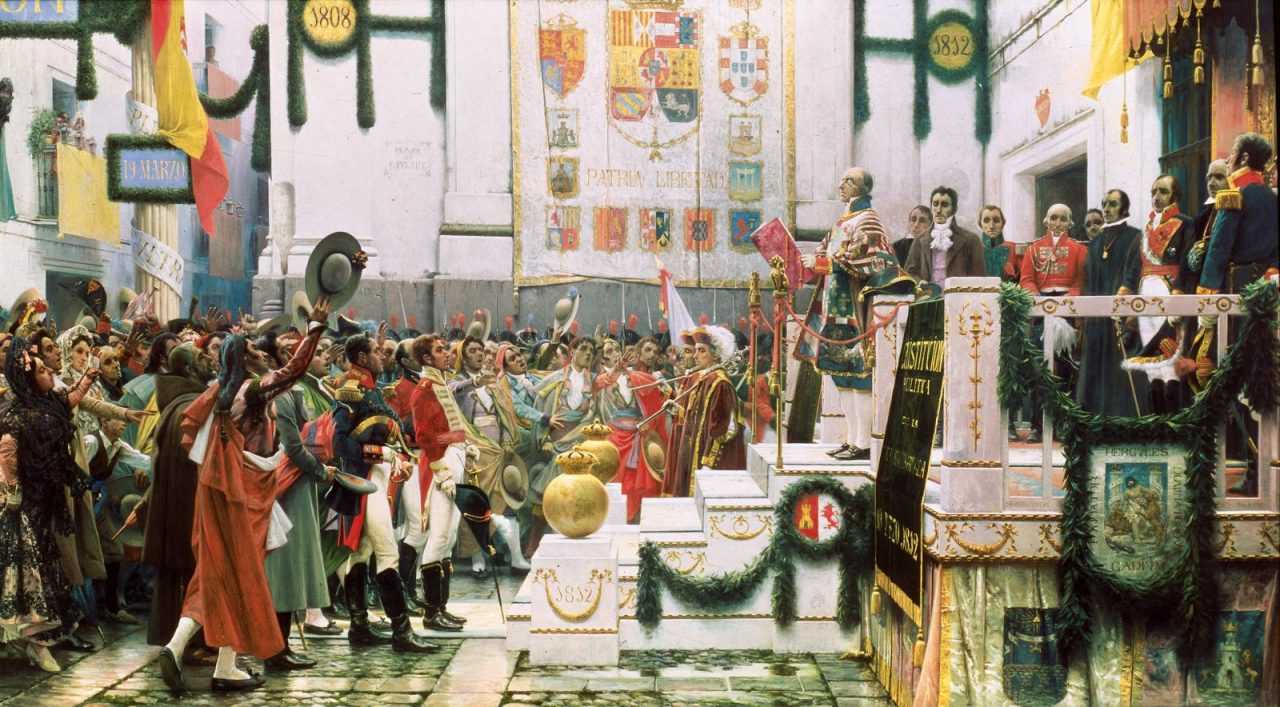 The promulgation of the Constitution of Cadiz in 1812 which declared the Canary Island as a province of Spain. Oil painting by Salvador Viniegra (Museo de las Cortes de Cádiz) – (Source : https://commons.wikimedia.org)

In 1407, it was Jean de Béthencourt’s nephew, Maciot de Béthencourt, who took over the governance of the island and married princess Teguise of Lanzarote. Considered a tyrant, he tried to sell the islands several times. Due to his uncle’s interference, he was not successful.

Both Spain and Portugal fought for the governance of the islands for a long time until 1479, until the Treaty of Alcaçovas granted the islands to Spain (Castile).

Under Spanish control, the Herrera family and their descendants were in power until 1812, when the constitution of Cadiz was drafted. It abolished the feudal system and declared the Canary Islands as a province of Spain.

Between 1730 to 1736, volcanic eruptions destroyed approximately 200 km² (about one quarter of island’s surface) of the south-western part of the island. This led to a destruction of dozens of villages and arable land.

In 1824, many smaller eruptions occurred. It was all these eruptions that gave birth to the Montanas Del Fuego, which today constitute the Timanfaya National Park and hence shaped Lanzarote into the eerie moon-like landscape it is today. 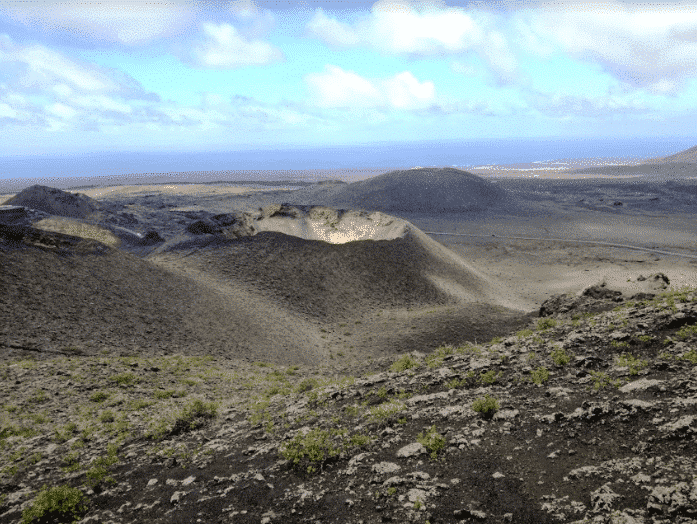 View on the Timanfaya National Park in the south-western part of the island – (Source : REDSTARSURF)

In order to create mass tourism infrastructure, the European large-scale coast urbanisation took place back in the 1960s. Therefore, Spain’s former dictator, Franco, developed every kilometer of Spanish coastline at high speed to keep up with the international demand for beach holiday destinations.

Unfortunately, Lanzarote did not manage to escape this mass urbanisation development entirely. However, thanks to the intervention of the local visionary and artist César Manrique, major damages to Lanzarote´s unique beauty were avoided.

César Manrique was born in 1919 in Arrecife and died in Tahiche in 1992. Following a traumatizing experience by participating as a volunteer in the Spanish Civil War, he studied technical architecture at the University of La Laguna, but dropped out after a few years.

In 1945, he decided to move to Madrid after receiving a scholarship at the “Academia de Bellas Artes” in San Fernando. After obtaining his master’s degree in fine art (drawing and painting), César Manrique devoted himself to surrealism in 1954. Thereafter, he was the first to open a non-figurative art gallery in Madrid, the “Fernando Fé” gallery.

Between 1964 and 1966, César was living in New York, linking in with the Andy Warhol and Rockefeller crowd. This support gave him the opportunity to rent his own studio there. Manrique became part of the pop art movement happening at the time. So naturally, a lot of his works are exhibited in the famous “Catherine Viviano” gallery.

Both Warhol and Manrique participated in the BMW Art Car Collection  between 1975 and 2000 and painted a BMW Car.

BMW Art Car Collection by César Manrique exhibited in India for the first time. Nowadays, you can find a lot of rental cars in our island with the same design – (Source : https://www.bmwartcarcollection.com) 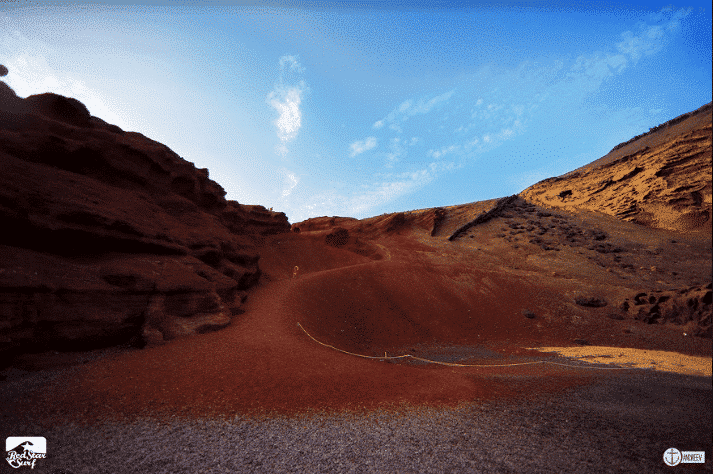 It was soon after his American stay, that he returned to Lanzarote with the firm intention of transforming his native island into the most beautiful place in the world.

César Manrique knew, that Lanzarote needed to promote tourism, but didn’t want his beloved island to fall into the hands of the mercenary hotel industry promoters. So César Manrique’s idea was to develop sustainable tourism, considering Lanzarote’s unique landscape, the ocean, the sun and the wind. In his intention to preserve Lanzarote in its original beauty, he fought against illegal construction projects and corruption for over twenty years.

Manrique did everything to preserve the islands natural beauty. In his eyes, the island itself was the true work of art. Manrique spent many days at Famara Beach, in awe of the rugged and surreal landscape. He wished to work and live in synchrony with nature. This wish and passion led Manrique on a battle to defend the islands raw beauty and true essence. Consequently, high-rise buildings and advertising hoardings are illegal on the island.

Lanzarote is like an unframed, unmounted work of art and I hung it and held it up for all to see. César Manrique

Also, Manrique left his mark on the island through sculptures, architecture, paintings and interior design. He transformed Jameos del Agua, which was formerly a bland but huge lava tube used by locals as a trash dump, into a stunning tropical garden, event space and impressive concert hall.

Likewise, he transformed an old quarry into the beautiful Cactus Garden, now hosting the biggest assortment of Cacti in the world. Mirador del Rio, a 475-meter-high lookout point, can be found in the north of the island on a steep cliff called El Risco, offers surreal views of the surrounds.

Apart from the more famous works mentioned above, Manrique created numerous lesser known projects. Check out this websites ; the Center of Art Culture and Tourism of Lanzarote and The César Manrique Foundation to learn more about all César Manrique’s projects 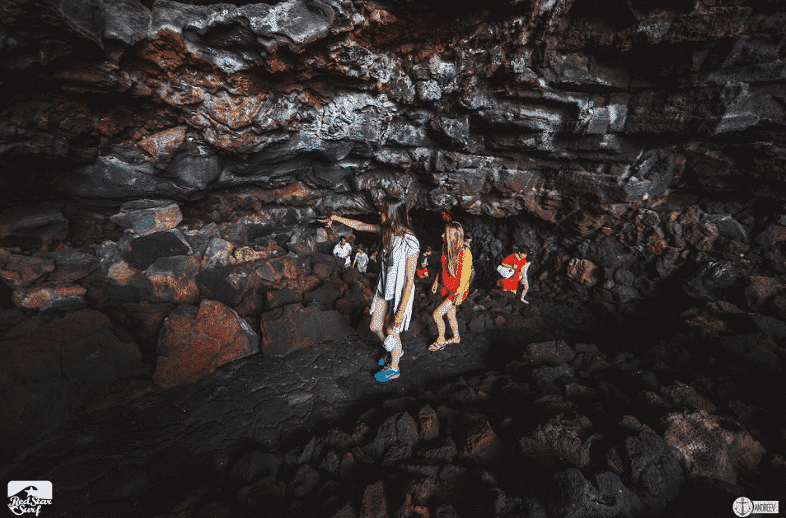 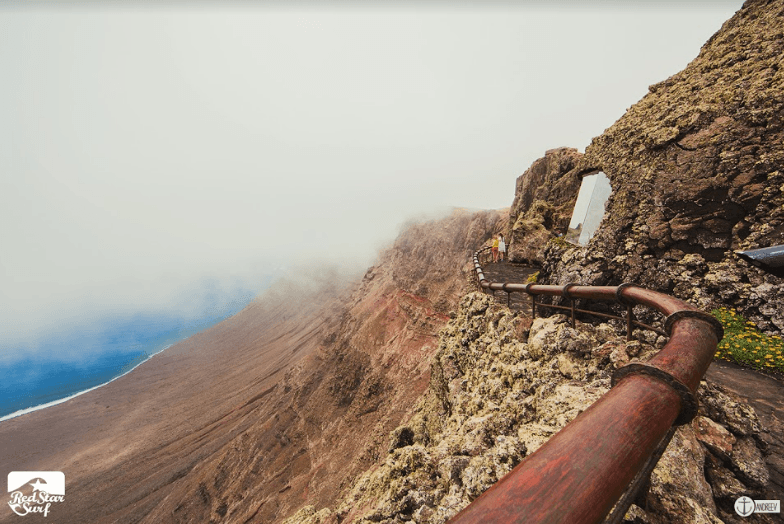 In 1995, the International Conference on Sustainable Tourism was held in Lanzarote. The public authorities changed their tourism policy and drafted 18 principles on sustainable tourism development. These addressed the objectives to public authorities, decision-makers, tourism professionals, associations and public and private institutions ,whose activity is related to tourism.

Later in 1993, big parts of Lanzarote have been declared as a UNESCO protected nature reserves such as the Volcanic National Park Timanfaya and the Parque Nacional Chinijo with the neighbouring island La Graciosa and the area around Caleta de Famara.

Thanks to the local visionary Manrique, and his immense perseverance for creativity and conservation, the law protects Lanzarote’s natural beauty.

If you like this article, feel free to look at our other pages to learn more about Lanzarote & surfing!